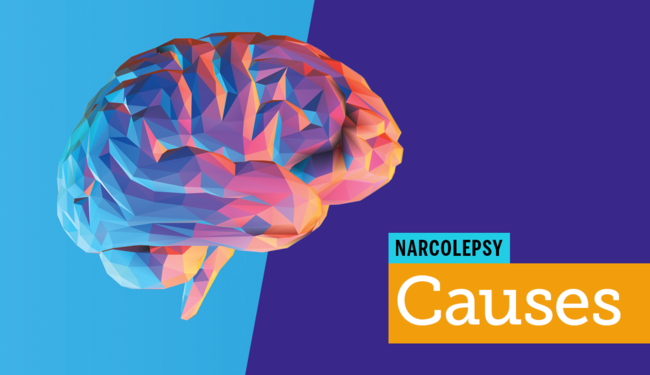 Narcolepsy is a chronic sleep disorder with symptoms that may include excessive daytime sleepiness, sleep attacks, dream-like hallucinations, sleep paralysis, and cataplexy (sudden loss of muscle tone triggered by strong emotions). The cause of narcolepsy is largely unknown. Researchers have established that both hereditary and environmental factors influence a person’s risk for developing narcolepsy, but no one has identified why some people get narcolepsy and some people don’t. Most scientists believe narcolepsy is likely caused by a combination of inherited and environmental factors.

Type 1 narcolepsy, characterized by the symptom of cataplexy, has been linked to low levels of a substance in the brain referred to both as hypocretin and orexin. Hypocretin helps to regulate sleep patterns and wakefulness and to transmit nerve signals. Hypocretin is produced by neurons (brain cells) located in the hypothalamus, a part of the brain responsible for regulating the sleep-wake cycle, body temperature, and appetite. Researchers have found significantly fewer hypocretin-producing cells and lower hypocretin levels in the brains of people with narcolepsy, especially those with type 1.

In someone without narcolepsy, the hypothalamus secretes hypocretin during awake periods to sustain alertness and suppress rapid eye movement (REM) occurring outside the normal sleep cycle. In a person with narcolepsy, low levels of hypocretin cause chronic excessive sleepiness and allow REM sleep to occur at abnormal times, resulting in cataplexy, sleep paralysis, and hallucinations. Some scientists believe that low hypocretin leads to “sleep state instability” in people with narcolepsy, causing daytime sleepiness and disturbed nighttime sleep.

Less is known about the biological cause of type 2 narcolepsy, characterized by excessive daytime sleepiness. One theory is that type 2 narcolepsy is caused by less severe injury to the neurons of the hypothalamus than occurs in type 1 narcolepsy.

Narcolepsy May Be an Autoimmune Condition

In most people, the immune system attacks infections and cancer, and it ignores the body’s healthy tissues. In autoimmune conditions like multiple sclerosis, lupus, and rheumatoid arthritis, aspects of the immune system develop abnormal responses and begin attacking the healthy cells and tissues of the body. In some people with narcolepsy, an autoimmune attack may damage the neurons that produce hypocretin.

It is important to note that while science is good at finding correlations, or apparent relationships, between factors and disease, correlation does not prove that the factor causes the disease. Many risk factors for narcolepsy have been identified and are being studied, but none have been pinpointed as the cause of narcolepsy.

Narcolepsy is not inherited directly from family members in any clear pattern. However, researchers have identified several genes associated with an increased risk for developing narcolepsy. One genetic variant in particular, known as human leukocyte antigen (HLA) DQB1*06:02, makes a person between seven times and 25 times more likely to develop narcolepsy. HLA-DQB1*06:02 and most other genes associated with an increased risk for narcolepsy are involved in immune function, which lends further weight to the theory of narcolepsy as an autoimmune disorder.

It is clear that inherited genes are not the only factor in developing narcolepsy. Between 12 percent and 25 percent of the general population have the HLA-DQB1*06:02 gene variation. However, only about 1 in 2,000 people, or 0.05 percent of the world’s population, are diagnosed with narcolepsy.

Furthermore, if one identical twin is diagnosed with type 1 narcolepsy (narcolepsy with cataplexy), the other twin has a 25 percent to 30 percent chance for also developing narcolepsy. Only 1 percent to 2 percent of people diagnosed with narcolepsy have a first-degree relative (parent, child, sibling) who has also been diagnosed. This familial risk is higher than the risk for someone in the general population to develop narcolepsy, but still quite low.

Certain infections may trigger the immune system to develop an abnormal response that leads to the development of narcolepsy. Researchers have found evidence of increased risk for developing narcolepsy following certain infections. One study found that risk for narcolepsy was more than five times higher after a bout of streptococcal pharyngitis, also known as strep throat.

For a few months after the H1N1 influenza virus or “swine flu” pandemic in 2009, the incidence of new narcolepsy cases increased sharply in several northern European countries. The countries that saw increases in narcolepsy had provided a brand of flu vaccine containing a specific additive, leading to a theory that the vaccine component may have contributed to the process that resulted in increased narcolepsy risk. However, one country that provided the same brand of vaccine did not see a rise in narcolepsy after the flu outbreak. More research is needed to better understand the connection between infections, vaccine additives, and the development of narcolepsy.

Age may be a risk factor for developing narcolepsy. While narcolepsy can develop at any point in life before age 50, researchers have established that new cases peak around ages 15 and 36.

In some children who develop narcolepsy, the condition may be linked to disorders of the endocrine system, which regulates hormones, sexual development, and metabolism. Children with type 1 narcolepsy (narcolepsy with cataplexy) frequently have precocious puberty and are overweight or obese.

Environmental factors are considered to be the sole cause of secondary narcolepsy, which is due to physical injury or disruption to the hypothalamus — the region of the brain where hypocretin-producing neurons are located. Secondary narcolepsy is very rare.

Cases of secondary narcolepsy have been documented due to the following causes:

In short, events or conditions that can cause physical damage to the hypothalamus may be potential causes of secondary narcolepsy.

Do Vaccines Cause Narcolepsy?

Vaccines do not cause narcolepsy. Only one specific flu vaccine, Pandemrix, used in some northern European countries circa 2009, has ever been implicated in raising the risk for narcolepsy in some children. Pandemrix is no longer in use anywhere in the world. No other vaccines have been connected with the development of narcolepsy.

Can Narcolepsy Be Prevented?

Since causes and risk factors for narcolepsy are still poorly understood, there is currently no way to prevent development of the chronic sleep disorder. If you have a family member (parent, child, or sibling) who has been diagnosed with narcolepsy, you have no control over the slightly increased risk that you may develop the condition.

You may have some control over environmental factors, such as infections. To lower your risk for contracting strep throat, avoid close contact with anyone who has a diagnosed case until they no longer have a fever or have been taking antibiotics for at least 24 hours. Use good hygiene practices such as washing hands thoroughly and frequently.

Amit M. Shelat, D.O. is a fellow of the American Academy of Neurology and the American College of Physicians. Review provided by VeriMed Healthcare Network. Learn more about him here.

Kelly Crumrin is a senior editor at MyHealthTeams and leads the creation of content that educates and empowers people with chronic illnesses. Learn more about her here.
hug (4) like (14) comment (18)
sign up to view previous comments 1 of 18

My daughter was a strep carrier and had horrible night terrors which we were told were normal. She has since been diagnosed with IH and medicine has changed her world.

Since the late 19th century, doctors have described a condition characterized by excessive...

Since the late 19th century, doctors have described a condition characterized by excessive...
read article >

Narcolepsy is a chronic sleep disorder that is characterized by symptoms such as excessive...

Narcolepsy is a chronic sleep disorder that is characterized by symptoms such as excessive...
read article >

Between 10 percent and 25 percent of adults in the U.S. report excessive daytime...

Between 10 percent and 25 percent of adults in the U.S. report excessive daytime...
read article >

Hypocretin in Narcolepsy and How It Affects Sleep

Narcolepsy is a sleep disorder that affects roughly one in every 2,000 people. The most common...

Hypocretin in Narcolepsy and How It Affects Sleep

Narcolepsy is a sleep disorder that affects roughly one in every 2,000 people. The most common...
read article >

Nacrolepsy is a sleep disorder in which the brain has trouble regulating the sleep-wake cycle. It...

Nacrolepsy is a sleep disorder in which the brain has trouble regulating the sleep-wake cycle. It...
read article >

Sleep paralysis is a neurological symptom — meaning it’s related to the nervous system. It's a...

Sleep paralysis is a neurological symptom — meaning it’s related to the nervous system. It's a...
read article >

Two Ways to Get Started with MyNarcolepsyTeam

Connect with others who are living with narcolepsy. Get members only access to emotional support, advice, treatment insights, and more.

Get the latest articles about narcolepsy sent to your inbox.

close
OVERVIEW TYPES DIAGNOSIS CAUSES SYMPTOMS TREATMENTS RELATED CONDITIONS
New to MyNarcolepsyTeam? Learn More
Quick Links
Q+A Treatments A-Z Resources Are you a provider? Crisis
About Us
What is MyNarcolepsyTeam? Partner with us Terms of service Press/News Privacy policy Cookie policy
Help With This Site
Getting started FAQ Community guidelines Contact us Accessibility
© 2021 MyHealthTeams. All rights reserved.
MyNarcolepsyTeam is not a medical referral site and does not recommend or endorse any particular Provider or medical treatment.
No information on MyNarcolepsyTeam should be construed as medical and/or health advice.